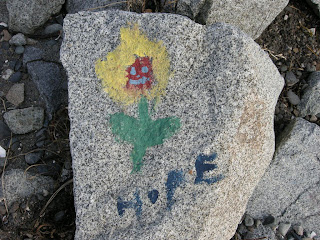 This is supposed to be the day when Hope takes over after too many years of letting ourselves be ruled by Fear. Even this rock down on the beach looks to be in agreement.

Yet today, when so many people are celebrating the cause of freedom and new beginnings, our Canadian government plans to start deporting a number of American soldiers who sought refuge in our midst. These are people who stood up for their principles, who didn't want to do battle in a war they couldn't believe in. Only this Canada of 2009 is sending them back to the U.S.

This despite the fact that Parliament dealt with a motion last June (yes, more than half a year ago) that would allow objectors and resisters to stay here.

Anyone on Facebook might be interested in seeking out the group called 'War Resister Action: Let Them Stay Week'. They've outlined a number of measures we can participate in to show our distaste for this current stance. Truly, I am embarrassed over this lapse in understanding who we are and what Canada has always stood for -- right back to the days of the Underground Railway.
Posted by hg at 8:21 AM