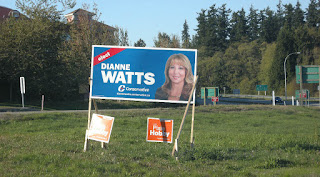 A federal election is approaching. Unfortunately, it might not get here soon enough to save us.

But again, maybe not.

Meetings to finalize details of the Trans-PacificPartnership are about to take place in Atlanta – too soon to have representatives from our (hopefully) new government in attendance.

Instead, Canada will be represented by Ed Fast, Minister for International Trade (and the Pacific Gateway) in the current regime, the self-proclaimed (by the PM himself) “Harper Government”.

I’m still wondering how it’s fair or democratic for a government that’s long since dismissed its still-currently-elected Members of Parliament to act on the world stage as if it’s still in power.

When it comes to my vote, it will likely once again be a wasted one, as the candidate in our riding appears to be a shoo-in.

Dianne Watts served as the Mayor of Surrey for nearly a decade, and on many accounts, seemed to do a good job. When she announced her plans to run federally, I wasn’t alone in thinking she would run for the Liberal Party of Canada (not to be confused with BC’s provincially based so-called ‘Liberal’ Party).

We looked forward to the thought that our riding would finally be rid of the do-little Member of Parliament we’ve had for the last three terms and thought that Watts might bring a semblance of actual representation to us. But then Watts surprised us by announcing she was running for Harper’s Conservatives.

She’s had some less than stellar moments during the campaign, notably thanks to a pamphlet bearing her name and likeness that raged about ISIS being the greatest threat to everyone in our riding, as if it were the most important issue this election.

It seems more than worrisome that she could be elected on what appears to be almost a non-campaign, one that's based on a platform of fear and the fact that she’s a ‘name’ around here. And even more frightening to consider what our country will become if the Tory government regains power.


As Heather Mallick commented in an article in the September issue of Harper’s magazine (no resemblance whatsoever to our Prime Minister), if the Conservatives get into office again, there might be a few of us thinking about moving to Denmark.
Posted by hg at 5:27 PM No comments: 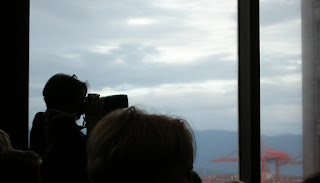 Launch. Whoever dreamed up that term for welcoming a book to the world couldn't have had a better site in mind than SFU's Harbourside branch. What better place for a launch, than beside Burrard Inlet, looking out over the water.

On Wednesday evening, a new anthology, The Revolving City, was launched there.

That site was doubly appropriate as the anthology presents poems by writers who have participated in SFU's popular Lunch Poems series -- and the venue for those readings is barely outside the door where the celebratory launch was held.

As with any such collection, many people were involved in bringing the book to fruition. One of those is Kim Gilker, the photographer in the image above. She's taking a picture of George Bowering, as he's reading a wonderful poem from the book by the recently-deceased Jamie Reid.

The poem suits the image, as it's a powerful rant piece called "Prayer" with the following lines that repeat as part of the chorus.

And yes, the poem is all in caps, so is probably meant to be shouted across the universe.

The sky glowering in the background as sunset approaches seemed the just-right companion to Bowering's reading.

And this event was just the first in the four days of this year's Word Vancouver event. What a great start to it. If you're in range of Vancouver, maybe I'll see you Sunday at Library Square.
Posted by hg at 5:55 PM No comments:

On retreat, an annual affair 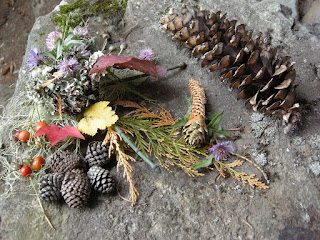 One of my favourite weeks of the year is the one I get to spend on retreat with my writing group. We've been doing this every September for more years than I'm sure of -- at least five.

This year saw us in a different setting (we usually go to Nanaimo, on Vancouver Island), as one of our brainy members found us a house to rent in Whistler. I'll admit that I felt some trepidation, as I've never felt quite 'upscale' enough to be part of what I'd imagined as the Whistler scene.

The house we were in was comfortably nestled into a hillside of trees, so I felt at home right away.

The trail system was terrific, the village barely a kilometre from 'our' house. I even managed to get relaxed enough (thanks maybe to a fabulous massage I had at one of the local businesses) to enjoy poking my nose into some of the village shops.

And those trails led plenty of other places besides the village. The 'bouquet' above, placed on the 'vase' of a large rock outside our front door was comprised of bits of wildflowers, rose hips and pine cones gathered during foresty walks. 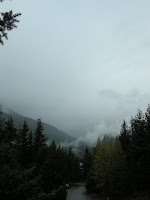 I'm pretty sure all of us accomplished the writing we'd aimed to get done. And best of all, I think we all came away refreshed and looking forward to a 'new year' of writing.

When the clouds made their way down the mountain on Saturday, each of us made our way down the Sea to Sky Highway, homeward, our heads filled with mountain air and memories, just about in time for the autumn Equinox.
Posted by hg at 5:53 PM No comments:

Thoughts on a long weekend 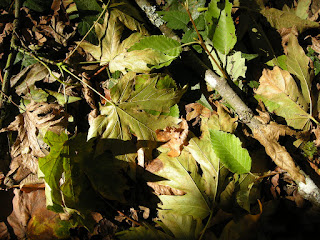 The scents in the air have changed. Thankfully, there's no longer any hint of the smokiness we had during the worst of the forest fires. But it's more than just the clearing of the atmosphere now that we've finally had some rain.

It's a new scent, one that's sweet, something like apples slowly baking in the oven. But it's not a scent from the kitchen that I'm meaning -- it's a scent that fills the outdoors.

Yesterday we took a long walk through Campbell River Valley Park in Langley. Many branches and big limbs were still down from last weekend's storm, but staff had done an amazing job of clearing the trails.

Today saw our 'outside time' here at the house. Picking the ripened quince, pruning some of the bushes and trees, taking down the tent and packing it away for next year.

But just as during yesterday's stroll, being outdoors today has again been a time for thinking.

Probably more so than in January, this always seems like a time for beginnings, and is likely the reason Rosh Hashanah, the Jewish New Year, has always made such good sense to me. This year that isn't observed until next weekend, but where I had challah bread last weekend, I'm feeling a kind of symmetry, and thinking this weekend -- sandwiched between those two -- is 'my' new year.

There've been other years when this has been the weekend for writing (or trying to write) a Three-Day Novel, though that hasn't been on this year's agenda.

This year's thoughts are quieter and much less frantic. Listening to the birds, noticing the angle of the changing sunlight and, oh yes, just breathing in those sweet autumny smells.