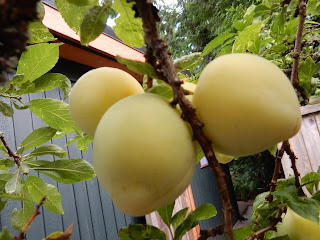 These July days are, I suspect, just about as perfect as anyone's time on earth could be. The other day, reading a book outside, I looked up from the page and thought: If there's a heaven, I hope it's as good as this.

Yes, I still go to the grocery store, though every day we eat something or other from the yard. And so much of it seems to just come up on its own -- golden plums, the berries (though I do prune them almost weekly from March through August) and this year, a trio of peaches. 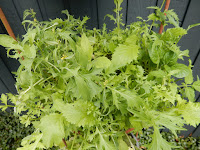 The salad bar takes a bit more fussing, with much of it needing to dangle in hanging baskets to keep the slugs at bay. Still, fresh greens every night (oh yes, beans too) are hard to beat. 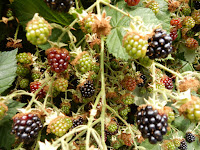 And as for those blackberries, they can be pickety. I'm often competing with bees, who still love visiting all those sweet white
flowers, but at least they seem to leave me alone. A few of them might buzz around my hand or head, but they seem to prefer the flowers to me.

It's the thorns that keep wanting to grab, and are the reason I wear glasses when I pick.

Still, a few nicks don't bother me, especially when I know what dessert will be. Blackberries, fresh off the vine, with even one of the last stragglers from the raspberry canes. 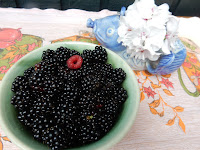 Heaven. Who needs it. Not yet anyway. 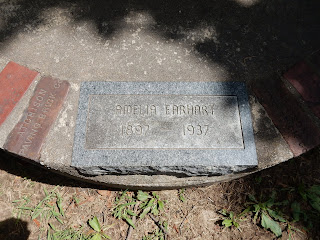 For all of the theories that exist about Amelia Earhart, the one thing I am sure of is that she's no longer alive. If she were, she'd be celebrating a very big birthday today -- her 122nd.

As mentioned in my last post, I spent the weekend attending the Amelia Earhart Festival in Atchison, Kansas, the town where she was born in an upstairs bedroom in the home of her grandparents. 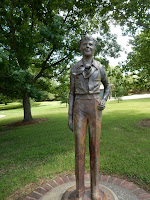 The town makes a very big deal about celebrating their most famous citizen. And I suspect Earhart is one of the main drivers of the town's tourism industry.

Several plaques and statues of her are placed around town -- this one is at the International Forest of Friendship, a site that recognizes many of aviation's pioneers and current heroes. Even our own Julie Payette and Marc Garneau have commemorative stones there. I'm hoping that next time I go back, I'll find one for Chris Hadfield too.

But now, I'll just say Cheers! to the woman whose life continues to inspire people everywhere (including me). 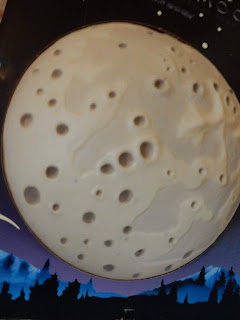 ...in other words, an anniversary for people who love the moon (though there's also a plant by the same name, selenophile). In seeking the word to match this meaning, I also came across 'lunaphile' which I must admit to liking, even though the only reference to it is somewhat buried in a comments section. Initially, I'd wanted to call this an anniversary for 'lunatics' until I found that pretty much the only meaning for that term is someone who's deranged and also that the word's become mostly unacceptable. 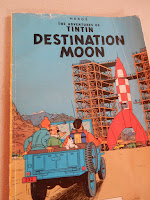 The reason for this post is, of course, the fact that today marks 50 years since human beings landed on the moon (at least as far as we know). Although if you're a follower of Tintin, you'll know that he and Captain Haddock were there long before Neil Armstrong touched down.

As this date has approached, there've been any number of memory pieces, but the one I loved most (and, unfortunately, can't remember where) was the man who told about his father going out and buying a colour tv towards marking such a memorable occasion. It's key to remember that not many people had a colour television in 1969. For one thing, their relative newness made them quite expensive. Having one probably seemed like an extravagance, maybe even showing off.

And then, as it turned out, when events of the moon landing came on, the images were only in black-and-white, as that's how they were broadcast. So much for a colourful celebration, at least that night.

I'm not sure exactly what I might do to celebrate, but the occasion does seem deserving of something special. If the weather holds, I will at least be watching fireworks tonight, as they're always part of the annual Amelia Earhart Festival, an event I'm lucky enough to be attending. I'm sure that walking on the moon would have earned Amelia's approval.

As for the photo at the top of this post, that's an item that hangs in my bathroom. After the light's been on it, it glows, casting a light not dissimilar from the moon's -- not really bright enough to read by, but enough to help me navigate my way back to bed.

And regarding my 'occasional' poem below, it's an effort based on a very fun edition of Magnetic Poetry -- moon-themed, no less. The set is full of official moon terms like 'gibbous' and 'crescent' and, of course, full. And even though I didn't use 'crescent' in my poem, 'waxing crescent' is apparently the phase the moon was in 50 years ago tonight -- nearly a quarter full, and growing. 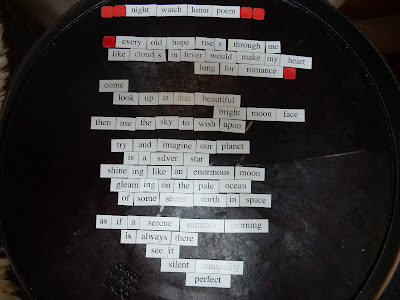 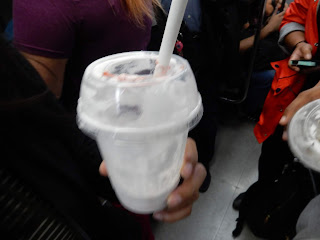 Riding the SkyTrain not long ago, owing to the usual rush hour crush, it was hard to ignore the drink in front of my nose.

I was close enough to be able to observe that the straw wasn't the dreaded plastic, but paper. Hurrah, I thought, but.

What about the cup and dome lid?

Big changes start in small ways, so I can't complain to see at least something changing. And I'm inspired when I encounter projects like the one I found at Lunenburg in Nova Scotia. Their goal is to get the rest of the Maritime provinces on-board, but they're not afraid to start on their own.

The City of Victoria was told this week that they don't have the jurisdiction to be able to ban plastic bags (for now, at least). Vancouver's main actions so far have been ongoing studies, but at least these show that we're improving.

The transition away from plastics is going to continue to be tricky, that's for sure. But all we can do is keep trying, even when it's just eensy baby steps.
Posted by hg at 7:14 PM No comments:

A place of contradictions 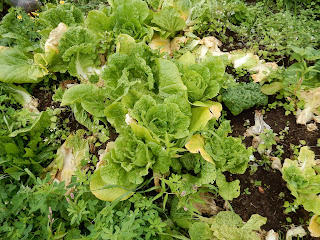 Sometimes Surrey, the city where I live, can make me want to pull out my hair in frustration -- from day to day, it can be so very up-and-down.

On Friday I attended a workshop in Newton, one of our city's many 'cities within the city' -- I guess a previous township of its own, it's now considered one of the city's town centres. It's an area that sometimes gets a bad rap, as it's had its share of crime occur. 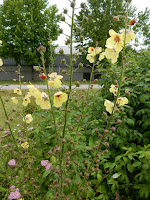 But on Friday, there was no mention of crime, as a group of us were led on a tour of a place that could almost be called a transformational miracle -- an amazing community garden, providing beauty, food, and opportunities to work outdoors for anyone who chooses to participate.

And yes, please click on this PLOT project link, as it's quite an adventure, complete with video of how this miracle came about.

The project embodies an idea that really puts the 'unity' into the concept of 'community'.

But then on the weekend, Newton made the news again -- this time with a dreadful house fire, one that investigators have started calling suspicious. Worst of all, there were injuries, and to children. 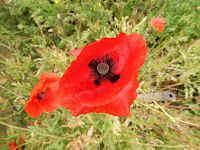 Yet, I'd prefer to think back on the workshop -- a project that saw us gathering images to be used in an amazing-sounding exhibit in September by Toronto artist Faisal Anwar. Since part of our task in the workshop was to take photos of the wonderful sights we saw in the gardens, that's what I'll close with -- an image of beauty.

Yes, please, I say, more beauty for all.