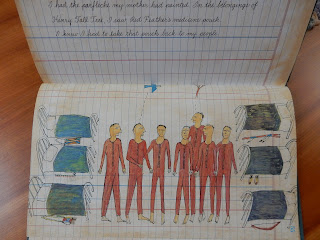 I can't quite bring myself to call it an anniversary, as that conjures happy celebrations in my mind. This one, observed yesterday, is not a day for celebrating. Yet it's certainly important enough to mark and remember.

It was a year ago that the announcement came, telling us that 215 graves had been found on the site of a former residential school here in BC.

This morning, poking through a stack of books in the living room, I once again opened a book that tells a story of life in such a school. Called The Ledgerbook of Thomas Blue-Eagle, it's a contemporary re-creation of just the kind of books children were given to keep their lessons in -- leftover ledger books donated by the local bank. No matter that the paper was lined for keeping accounts; children kept their own accounts, in this case, with details of a boy's young life.

Text accompanying the image above reads in part:

At night we had to wear long red suits that scratched our skin. We slept on iron beds. It was very different from sleeping in my warm tipi under buffalo robes with Two Painted Horse nearby. Each boy was allowed only one keepsake to remind him of home...

This book and its story comes from the US, where things were somewhat different than here in Canada. For one thing, I don't believe children in our residential schools were allowed to keep anything, not even their long hair.

Because I've been away (and offline), this blog has been empty for a few weeks. But with an observance as important as this one -- with even our Governor General in attendance -- it seemed like the right time to come back to the big limb. 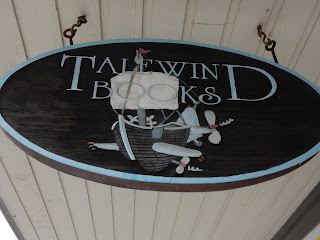 It was a great day to be able to visit BC's Sunshine Coast.

First on the agenda was a reading at Gibsons Public Library. It was one of the first times I'd been able to read to a live audience -- but not only a live group, but some Zoom participants as well. 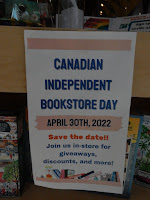 Afterward I zipped up the 101 to Sechelt and Talewind Books, a store about which I'd heard many a tale (all good). My reason for any urgency? Saturday was Independent Bookstore Day.

With some guidance from the very helpful employee, I bought a few books, including the most remarkable treasure, The Lost Words. Its subtitle: a book of spells, suggests its purpose is to conjure back words that were removed from a widely-used dictionary whose editors had decided the words were no longer all that relevant to childre. Dandelion, Raven, Fern. Really?

All in all, a wonderful find -- and truly, all because I encountered a human being/worker in an independent bookstore who led me to a book I am sure I will value always.

Angels on my shoulder 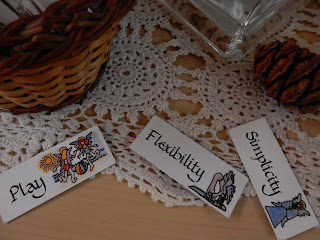 Yesterday was one of the first times (in waaaay too long) that I've gone into Vancouver. Best of all, the occasion was for a workshop I was leading, in one of my favourite venues, the Carnegie Centre.

Name of the workshop was 'Voicing Resistance' and its point (beyond getting together with a terrific group of people, the FireWriters) was to get all of us thinking about ways to write meaningful work about troublesome issues. It was all about getting ready to join in on a public event on Saturday, May 7th -- one of the many parts in the upcoming DTES Writers Festival .

Before I left the house yesterday, I stopped by my little basket of 'angel cards' to see which special angels might help guide me through the session. When I looked these up to share what I mean by angel cards, I discovered an entire world of them, many of which were compared to Tarot or other cards for divination. Who knew? Not me. I hadn't known that there were books that could show you how to use them beyond the simple way I have always done: simply pulling three and keeping those three concepts in mind as small fortification for the day.

No book of interpretations to guide me, but I was certainly pleased by the three angels I selected to 'accompany' me for the day. Happily, they all seemed to play a role in a delightful afternoon.

N.B. For anyone living in or near Vancouver, the afternoon of May 7th (1 - 5 pm) has been called an 'Activism Afternoon' with workshops, slogan writing and an Open Mic reading (sign-up at the event) -- all taking place at Oppenheimer Park. 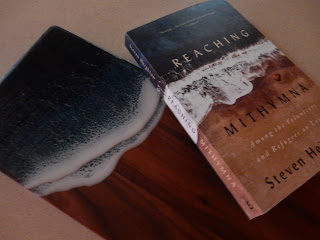 I'm not pretending to know what happens to a person after they die, but it's hard not to think of the most recent of our losses as writers who deserve to each become a star in the heavens.

The first of these, Brian Fawcett, died at the end of February. Considered by many as a Toronto writer, it always seemed his heart remained here in BC, specifically in Prince George where he was born and grew up.

He said his goodbyes on Facebook, commenting in that wry way of his, that he knew the end was coming and that the words he'd posted would be his last on social media. I suppose it would have made him happy to know that he was right.

Midway through March, it would be Ellen Jaffe who would 'leave this mortal coil.' Our paths first crossed in the early 1990s when we were co-judges for a poetry contest for the League of Canadian Poets. Soon after that, we found ourselves working as co-editors for another project for the League, and it wasn't long after that when we finally met up. Our friendship endured over the years; I ended up writing a blurb for one of her books of poetry. When one or the other of us travelled east or west, we'd invariably find the other and at least have a good long gab.

She took the time to phone me ten days before she died. She wanted me to hear it from her that she was going into hospice. I knew she'd been doing cancer treatments for months and months, and that it had been a recent decision to stop taking them, as they were no longer offering effective treatment. So although I was sad, it wasn't a big surprise when only ten days later, she was gone. Her son was kind enough to phone me when her time came.

But then yesterday, yet another death, and this one came with the blunt force of shock. I knew Steven some, and had once interviewed him for a literary magazine. But I knew him best by way of his writing. He was prolific, as the pile of books on his website will attest, and many of them earned him awards.

Because this is National Poetry Month, last week at our local Open Mic, participants all had to read a poem. It didn't have to be a poem they had written, they just had to give credit to whoever had done so. I read a poem, but not one of my own. Without knowing he was ill, I read a poem by Steven. It's piece that was included in the book of his that I'd read most recently, the one in the photo above, Reaching Mithymna. Oddly, it's the only poem included in the book, which is actually a memoir of his experience in 2015 when he was a volunteer in a refugee camp. If you scroll to the bottom of this obituary on CBC, you'll find the poem I read, "Christmas Work Detail, Samos." I'd chosen to read it because it seemed like the strongest poem I knew to deal with the daily crises facing refugees, so many of whom keep streaming out of Ukraine. It's a poem that's bound to stay with you, just as my memories of these three wonderful writers are bound to stay with me. 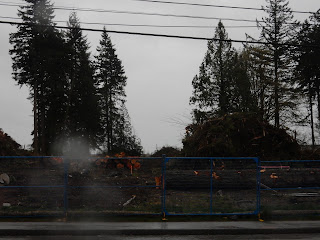 Surrey, the city where I live, used to be known as the 'City of Parks' but somehow that must have not fit the 'vision' of our planners. The tagline is now 'The Future Lives Here.' Whatever that's supposed to mean, I'm not sure.

Not only does the 'Parks' designation no longer exist, it appears that our forests must also disappear.

It's taken me a while to write any words that might address the sight that greeted me two weeks ago when I had the misfortune of needing to drive along 24th Avenue. Seeing this devastation, I'll admit, I nearly threw up.

I suppose I should take consolation in the fact that it appears the felled trees will perhaps be taken to a mill to be turned into lumber, rather than the practice I usually see, with trees chopped into rounds, which are all but useless for much of anything.

And yes, I keep worrying about the forested areas currently awaiting action on development of the 'South Campbell Heights' development. What exactly will it take for us to protect those trees from the fate above. Perhaps it's time again for people to show that they give a damn. 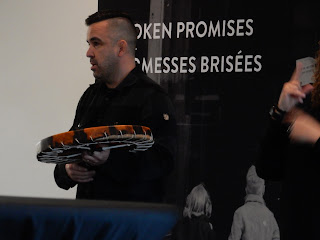 There's a new show on at Surrey's Museum. Called "Broken Promises" it places the spotlight on events that occurred in 1942 when Canada placed the tag 'enemy alien' on people of Japanese descent. First generation or third, it made no difference. If you were in any way deemed to be Japanese, you and your family (yes, little children and all) were rounded up and sent away to camps.

In addition, your possessions were seized, on the promise that they would be held for a later date and you'd get them back. That was just one of the many broken promises.

Boats that belonged to fishers were gathered together and burned to the waterline where the sea at least had the mercy to douse the flames.

Appropriately it seemed, the celebration marking the opening of this important exhibit started with a blessing and a song from Harley Chappell, elected chief of the Semiahmoo Nation. He has a rich singing voice which, accompanied by the drum he holds in his hand, certainly seemed to command respect from all who heard him. Chief Chappell, as well as the other speakers, had their words interpreted by two signers. You can see the hands of one of them in motion in the photo above.

Considering all that's gone on this week, with the delegation of Indigenous people in Rome, it was hard not to think of the sign for this event as also possibly meaning "Token Promises" as so many of the promises made to Indigenous Peoples via treaties and other agreements have not been fulfilled. 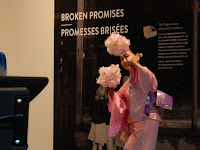 Despite the sad circumstances which this event was commemorating, the evening itself held new promise, including its recognition of the currently unfolding spring, as with the presentation done by a troupe of Japanese dancers -- in this case, celebrating the time of cherry blossoms.

Across the world, seeking hope 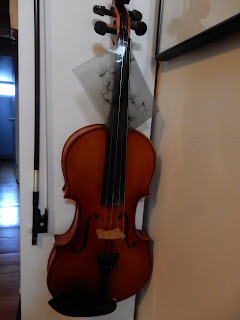 This week is the long-awaited (and oft-postponed) trip to the Vatican for a delegation of Indigenous people. They're there to see the pope on what I feel is an excursion for hope. Hope for an apology from the pope on behalf of the Catholic Church, hope for meaningful settlements and the return of plundered artifacts, hope most of all, for healing.

The group ranges from elders to youth, all of whom have been affected in some way by the trauma of residential schools, whether because they attended these 'schools' or whether they're among the many affected by the generational after-effects.

I love the fact that music is one of the gifts being brought to the pope. Here's a link to a 45-second video of two young Métis who brought along their fiddles.