A book for Obama 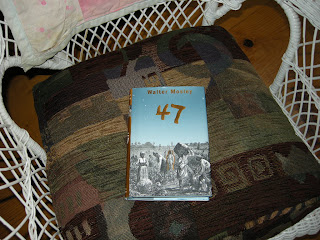 Today I received a notice listing Barack Obama's favourite books. It was quite a mix, and included a John Steinbeck I'd never even heard of, In Dubious Battle. Also mentioned was the poetry of Derek Walcott, but happiest of all, I think, is the fact that he's read all seven Harry Potter books.

I've got a book I think he would like. It's called 47 and it's all about the meaning of freedom. It's a first-person account of being a slave, but it moves well beyond historical fiction.
That's even the age Obama is, 47.
Posted by hg at 9:27 PM

Email ThisBlogThis!Share to TwitterShare to FacebookShare to Pinterest
Labels: books

I'll have to check it out.

And when you do get a chance to read it, I hope you'll let me know what you think.