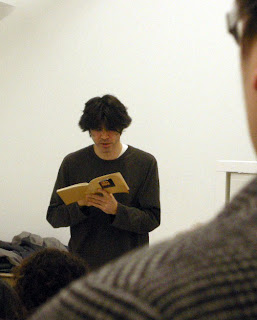 While that header looks a lot like the plotline for a zombie show -- think: The Walking Dead -- the event in question couldn't be further afield.

Every other month, a dedicated group of Vancouver poets host readings in which they celebrate the work of -- yes, dead poets. They call themselves the Dead Poets Reading Society, and should not be mistaken for the similarly-titled film with Robin Williams.

Yesterday's event had series founder David Zieroth reading from the poems of Thomas Hardy. I'd known Hardy as a novelist (Tess of the d'Urbervilles, Jude the Obscure, etc.), not a poet, and Zieroth offered just enough in the way of introduction and backnotes to really make the poems (if not the poet himself) come to life.

Diane Tucker then presented poems by Christina Rossetti. Again, I was surprised, especially by the underlying sexuality in the poems. As I said to Diane afterwards, 'I'd always pretty much dismissed Christina Rossetti as being kind of an old fart.' Hardly poetic, but that's what I'd thought.

Miranda Pearson then read poems by Stevie Smith. Pearson's lovely English accent made it almost seem as though Smith might be in the room. And yes, she read the most famous of her poems, "Not Waving but Drowning" -- the phrase Janet Frame picked up in her great(est?) novel, Faces in the Water.

Garry Thomas Morse (pictured above) did a similarly eerie reading of work by Jack Spicer. This wasn't too surprising a choice for Morse, as his 2010 collection, After Jack, is a kind of transformational homage to Spicer.

The event ended with John Donlan presenting examples of the lifework of Edward Thomas, a poet I'd never heard of. Like, duh. I'm supposed to know these things, aren't I? Thomas was killed in World War I, only three years after he'd turned to poetry. It's interesting to imagine what he might have written had he lived.

Several of the afternoon's presentations seemed almost like channeling -- but maybe I was just getting into the spirit of things.

The next reading in the series will celebrate the poetry of Irving Layton. The event will take place on March 11th, the day before what would have been Layton's 100th birthday. Maybe see you there.
Posted by hg at 3:07 PM