The turning of the tide 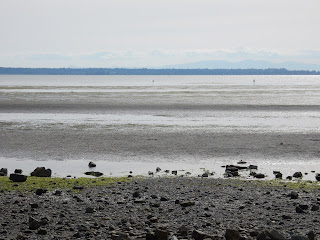 Today is the last day of spring, officially, as tomorrow evening (8:32 pm PDT) will be solstice. Really, it's hardly felt like spring of late, more like a long, extended winter. Altogether too many bad things have been happening, including covid deaths. The latest, and we certainly hope the last of these, was the husband of my sister-in-law Sophie, who left us at the end of January. Soulmates perhaps with husband joining his wife. It was a bit as though one might have called the other.

But yesterday, walking on the beach when the tide was almost exactly at its lowest, along with a glimpse later on of the waxing moon, gave me the feeling that the tide is turning.

And maybe today, officially recognized as Juneteenth, will really be the start of shifted thinking.

Statues of colonizing figures are coming down, an action that stirs mixed feelings in many.

Indigenous people are finally being given the chance to take charge of the forests in B.C. Whether this action will take place in time to make a substantial difference, well, we'll have to see.

Still, for a change, partly because I and most of my family have now received two doses of vaccine, I am finally starting to feel a bit more hopeful. 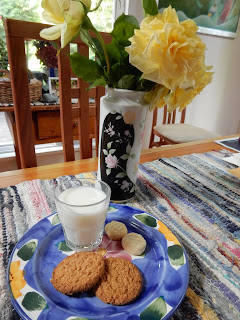 I never met her, but I felt I knew her. When news came this week that Shelley Fralic, writer and editor for the Vancouver Sun, had died, a physical sense of loss washed through me.

Her longtime pal and fellow columnist Pete McMartin was the one who broke the news to me -- on the front page of Tuesday morning's paper. His tribute to her is worth reading to the end, as he uses her own words in summary, and wise words they are.

She wrote about things that many would consider ordinary, but in such a fresh and honest way they rose above the plane of the mundane. A great example is a column from earlier this year, when she wondered why a worker at Canadian Tire didn't understand what she was looking for when she asked for a crescent wrench. In that same piece she muses further on encountering a worker at another store who didn't know what she meant when she asked about pink flamingo lawn ornaments. Worst was probably the supermarket worker who had no idea about Brussels sprouts.

Her point in that column was that it seemed to her that people are getting dumber. And maybe we are.

I sure feel that I am. In part because I never wrote to her (though thought of it a number of times). Why? To thank her. For what? Wasn't she just doing a job, one she was getting paid for?

The thanks would have been for writing in a way that always filled my head and made me want to read her column right down to the last word.

It would have been for making me think, and for occasionally making me explore; I doubt I would have become as accustomed to visiting Point Roberts if it hadn't been for a nudge from her.

In a recent piece she mentioned the small pleasure of eating cookies, but in such a way that I not only laughed out loud (alone, no less) but nearly choked. I was prompted to write to thank her for the laugh, and to say it seemed lucky I hadn't been eating cookies at the time.

But I didn't. Too many other emails to write, or maybe just the distraction of the day's Sudoku. Whatever, I didn't thank her, and now I can only regret that I didn't. I can just hope that mistake will help me express thanks the next time I need to, especially when it's for something as life-affirming and important as a laugh. 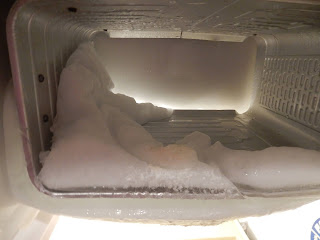 It's true. The glaciers are melting at what seems like ever-faster rates. The latest chunk to fall off of Antarctica is bigger than the state of Rhode Island, or 70 times the size of Manhattan (though without the skyscrapers).

And yes, old-growth trees continue to fall -- or at least they will if protesters at Fairy Creek don't soon make a difference to our ever-distracted premier. It seems that really all the protesters are asking is that the government honour the standards they've already agreed to uphold. Only they aren't keeping their word. And they've used the power of the courts (an injunction) to hammer their fist down.

But worst of all is the news that 215 children, some as young as three years old, are buried on the grounds of what once was one of our federal government's residential schools.

So, with all such terrible news, I can only offer the photo above which gives you a glimpse of my own glacial project -- defrosting the pantry fridge, a luxury (despite its manual defrost needs) which I remain thrilled to own.

Even though it's now starting to feel like summer outside, the chunks of ice I tossed out into the back yard hadn't all melted by morning -- shades of Newfoundland, but on the west coast!

Truly, things can only improve. 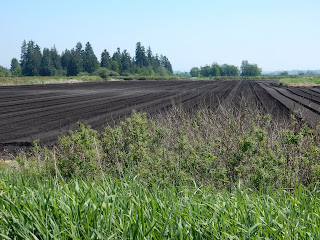 Today, as I observe (I didn't say 'celebrate') Victoria Day, I can't help but think about the things I might usually do.

For one thing, it's traditionally the day for planting things -- thus, the shot of the beautiful black soil, looking as though it's ready for seeding.

It's also the day I usually put my two hibiscus trees outside, so they can soak up the summery sun instead of being reliant on light that comes in the window, the situation they must tolerate from Thanksgiving and through the winter. Today, because it's rainy, I'm too lazy to drag them outdoors (besides, they've grown for so many years, they're heavy -- I'll wait for better conditions). Maybe by tomorrow. Who knows.

One thing that doesn't happen very often, but happens to be the case this year is that we're observing it on the actual date of her birth, the one that goes with the old rhyme.

At least we managed to have an outdoor meal on Saturday -- kind of a picnic -- a way to kick off what we hope we will be a decent summer.. 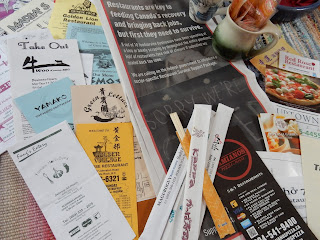 In 2009, I started a blog that answered that question every night for a year. That first post wasn't very exciting, though over the year (and beyond) I like to think it got better. Heck, how many people do you know who could tell you what they had for supper twelve years ago (even if they are off by a day)? The post for May 17th seemed more appropriate (and looked more delicious too, though maybe I'm just hungry). I'll admit that I've spent a while poking around there, looking for inspiration perhaps, and have to say that one of the days most important to me is a meal that looks, at first glance, pretty ordinary, though the story that goes with it is anything but.

Though I digress. Today's post is the result of a full-page ad I saw in yesterday's Globe and Mail, the Saturday paper I like to save for reading on Sunday. The ad reminds us of how the restrictions required during these pandemic times have made things so difficult for anyone in the restaurant trade (so I suppose this is my version of a 'Restau-Rant').

Costco and Walmart and the other corporate biggies are laughing as always, all the way to the bank with their profits. It's the family-owned, local businesses (so many of which are restaurants) that are suffering. We need to feed the businesses that comprise our local economy by letting them feed us.

As you can see from the array of takeaway menus on the table, we have a great selection of restaurants nearby. Sadly, none of them are open now -- except of course for takeaway. Because I already had something mostly planned for tonight's supper, I'm not ordering in, though I plan to do so at least once in the coming week -- maybe twice, just because I can.

The season of green 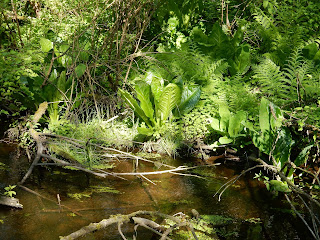 There are so many beautiful places to take a walk. This spot, in Aldergrove Park, looked so lush I just had to take a photo. It was almost an accident that I even stopped there, but I'm glad that I did.

Not only because the scenery was great, but also because I found a great patch of still-tender nettles shoots. And luckily, I carry a pair of scissors as well as sturdy gloves in my car. While there are people who pick these without benefit of protection, I'm one who prefers to avoid their sting.

I only took a small harvest, but enough to make a few packets for the freezer -- either for lasagna or manicotti as a spinach substitute, or else for my version of nettle-kopita (again, instead of the usual spana-version). 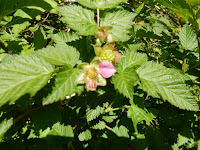 While I poked around in the bush, I even found the first evidence of the season's berries, the always reliable, at least around here, salmonberries. A good sign for more bounty to come. 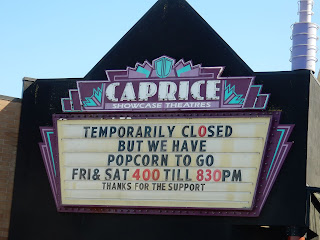 Saturday night at the movies. What a great tradition. Often with a meal at a restaurant beforehand, or a drink at the bar afterwards.

The photo illustrates how our local theatre, the Criterion, is doing its best to support itself during the various stages of shutdown.

Even though they've upgraded the seats, established a 'seating plan' so they can sell tickets and have patrons socially isolated according to protocols, they're not allowed to show films to paying clients.

Last film I saw here was Tenet, a film I could have done without, but which was the only current film offered on the night I wanted to go. At least I got to have some popcorn. Something I have again tonight.

Another theatre facing difficulties is the heritage venue in Powell River, the Patricia, home to the Powell River Film Festival. This year, the festival was virtual, so I at least got to see a couple of films on my list, Zappa and Ammonite.

And yes, to me, cinema matters.

If you have ideas to help support it, please act.